I was featured on the news...Squatters are becoming more common in Sacramento... 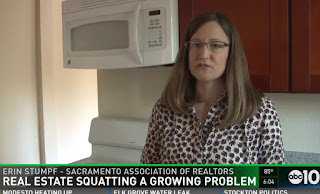 It seems like "squatters" have become an issue again. For several years during the housing crash, as many homes sat vacant they were prone to vandalism and break-in. It was not uncommon to encounter people squatting in homes. When values started to go up again and there were not as many vacant properties, it seemed like squatters became less of a problem. Fast forward to today, and squatters seem to be an issue again.

What is a squatter? A squatter is someone who unlawfully enters into a property and stays there without permission from the owner. It is a crime of opportunity, as well as the fact I do think that with the proliferation of smart phone devices squatters can search MLS for vacant property to target.

I encountered squatters at one of my vacant Midtown Sacramento duplex listings a few months ago. I approached the property to install a carbon monoxide detector, and noticed a shopping cart near the front porch. As I got closer I could hear voices inside and footsteps echoing off the hardwood floors. I immediately called the police. Before the 9-1-1 operator could take my information, a police car drove by and I flagged him down. Luckily those squatters did little damage and probably had not been there too long.

I just represented buyers on another Curtis Park triplex property that was broken into and torn apart by squatters. That property was the subject of an ABC Channel 10 news story by John Bartell. You can watch the news story here. Luckily I was able to negotiate a price reduction on the property once we got a full understanding of the extent of the damage, which in this case was extensive. All three HVAC units were stolen. Holes were punched in the walls. All of the copper plumbing and wiring was removed. It was bad.

How can you as a home seller prevent squatters? I highly suggest if you have a vacant property that you give it the appearance that it is occupied. Park a car in the driveway, or ask a neighbor to do so. Make sure your windows have blinds or curtains so people can not see inside. Put a lamp with a plug-in light timer in a few rooms that is set to go on and off during the evening. Keep the grass and landscape trimmed. Make sure you suspend mail so your mailbox does not overflow. Same with the newspaper. Set your alarm and spring for month-to-month monitoring services. Make sure your neighbors are aware the property is vacant and let them know to alert you to any suspicious activity.

A little vigilance goes a long way.
Posted by erin@erinstumpf.com at 9:23 PM