Quoted in a Sacbee article about the 2019 Sacramento real estate market forecast... 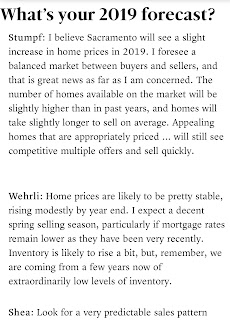 I was quoted in a Sacramento Bee article this weekend - Tony Bizjak interviewed a panel of Sacramento real estate experts including myself, appraiser Ryan Lundquist, and a few others to get our thoughts on the 2018 market and what we foresee for 2019.

I was not surprised to see that our answers were all fairly similar. And none of us predict that our market is in a "bubble" right now. That seems to be a popular question right now after increasing home prices for the last several years, since the bottom of the market in 2011.

I hate being asked the "are we in a bubble" question because I think most people associate the word bubble with what happened in the real estate market back in 2005-2007 when the real estate market literally exploded and the bottom dropped out of home prices. I do not believe we will experience a situation similar to that era anytime soon. The longer answer is a little more complicated.

I think psychologically, a lot of people see that home values are approaching where they were in 2005 and fear a bubble. While it seems like yesterday, that was over 13 years ago! According to Trendgraphix, Sacramento County's median home price at the peak of the market in August 2005 reached $395,000. December 2018's Sacramento County median home price is $365,000. The reality is that the value of money changes over time, and when adjusted for CPI inflation, Sacramento's median home price would have to be approximately $507,000 today to be equivalent to the 2005 peak. When I earned my masters degree in public policy, the concept of adjusting for inflation and making values equal in today's dollars to be able to compare apples to apples was really beaten into us. I think this idea is absent a lot of analyses that I see.

Part of the run-up in prices from the previous peak was fueled by bad lending products like stated-income (non-qualifying) zero-down, interest only, or negative amortization loans. Those previous buyers hyper-extended themselves and could not actually afford those homes, and when the market declined many had to short sell or were foreclosed. We actually do not have those artificial lending products anymore, and buyers have to qualify for loans. Your average buyer today can not get a loan without verification of income, assets (for a 3-5% downpayment at a minimum), good credit, income and/or employment. Generally with unemployment rates low, interest rates still relatively low (and having dipped a little in the last month), and home prices still relatively affordable for California, I just do not foresee a bubble. And when the market does eventually decline -- because prices can not go up forever, and someday it will -- we will not have the same hyper-extension and level of buyer default that added gas to the fire before.

What I think we do need to be aware of is that incomes have not risen commensurately with sales prices, and we are likely approaching a saturation point where affordability becomes an issue. I believe that this is what will lead to stagnation of home values in Sacramento. But not a bursting bubble. There was an article this week in Comstock's Magazine that is a pretty good read that reviews the history of past real estate cycles. It is interesting to note that in past market cycles, the bottom did not drop out of prices the way it did during the Great Recession. Anyway, I am off to a super busy 2019 and I look forward to a solid year of helping both home buyers and sellers.
Posted by erin@erinstumpf.com at 9:13 AM