Featured in a CBS13 story about if the Sacramento real estate market is in a bubble... 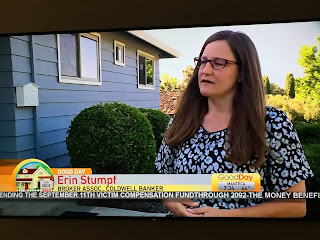 I hate the word "bubble" as it relates to the real estate market. Bubble, to me, is a loaded term that implies that things may burst. Prices can increase without impending doom. I think memories and the wounds of the recession and home price collapse in Sacramento from 2005 - 2011 are still fresh in a lot of people's minds. They are in mine! But the past Great Recession and price freefall is not a persistent framework for what may happen in the future.

The Sacramento County median home price rose to $390,000 for June 2019, which is nearing the previous peak price from August 2005 of $392,750. And CBS13 reporter Rachel Wulff asked "is the bubble going to burst?" No. Will the market cycle at some point lead to stagnation? Sure. At some point. Watch the full interview here.

14 years ago, lending standards were so loosey-goosey you could fog a mirror and get a loan. Borrowers could lie about their incomes, or even about having a job! Borrowers could finance more than 100% of the purchase price and get cash back at closing. Borrowers could get negatively amortized loans and make a "minimum payment" like credit card, only for the principal loan balance to increase every month. Some industry professionals were ethically fast and loose. There was rampant fraud and speculation. It drove prices in an unsustainable way with several consecutive years of 20%+ increase in price. Yes, prices tanked, but should they have gotten that high to begin with? NO.

That was 14 years ago. As such, the regulatory pendulum swung the entirely opposite direction. Borrowers must have verifiable income, assets, credit scores and employment. Laws have changed in favor of consumer information and transparency. The bad industry professionals have been eradicated.

And now prices over the last 8 years from the bottom of the market have climbed back to near parity from their peak 14 years ago. Or have they? No, they have not. Think about how the value of money changes over time. EVERYTHING is more expensive than it was 14 years ago. A gallon of milk. A loaf of bread. The guy who mows your lawn. Electricity. Minimum wage. And house prices. As I note in the CBS13 story, inflation has also affected home prices. If you adjust the peak price of $392,750 for CPI inflation to today's value, home prices would have to climb overnight to $512,220 to be equivalent. We are far from that number. We are not even close to that number. (Side note: when I got my masters degree in public policy, adjusting for inflation was literally beaten into us as a way to compare like-for-like when doing analysis)

Another interesting metric worth pointing out -- more than double the number of Sacramento residents can afford to purchase a home now than they could back at the previous peak in 2005. According to the California Association of Realtors Housing Affordability Index, in August 2005, only 19% of Sacramento residents could afford a median priced home, while as of Q1 2019, that is 44%. Sacramento remains much more affordable relative to the state as a whole, which is at 32%. And WAY more affordable relative to the nearby bay area counties.

Comstock's Magazine did an article about past housing cycles in Sacramento earlier this year, linked here. Housing markets are cyclical. Ups and downs. Our past recessions have been more like slumps and stagnation rather than catastrophic avalanches of decline as we saw in 2005 - 2011.

So while I will not try to predict the future, what I can say is that markets do cycle. Every year for the last 5 or so years around the late-summer time the media freaks out that "this is it!" the sky is falling and prices are declining OMG panic in the streets crazy!!! Calm down. The market seasonally cycles every year. The spring is nuts, summer slows a little, picks back up over the fall, and slows again during the holidays. Then spring is nuts again. Every. Single. Year.

Ask me next spring if anything has changed. But is a bubble going to burst? NO. There I said it.
Posted by erin@erinstumpf.com at 10:30 AM